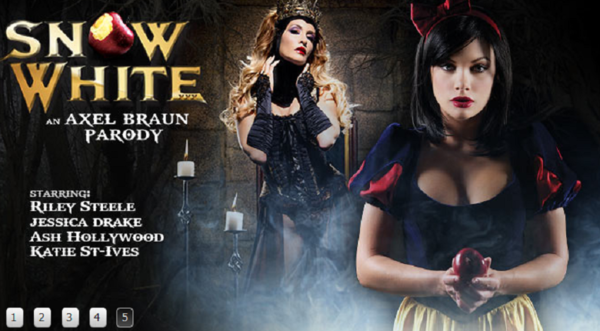 Mirror mirror on the wall, who’s the sexiest of them all? It’s the viewer’s choice when it comes to this naughty fairy tale from Wicked Pictures and Director Axel Braun. Might it be the vain queen played by jessica drake or Snow White played by Riley Steele?

Costumes and makeup in this movie are vibrant and fun. Maybe Wicked can offer the costumes for sale for a little role play?

Drake makes for a wonderful wicked queen – controlling, sassy, and dominant. Steel makes for a beautiful Snow White and manages to be the innocent girl which is quite a feat in an adult film. The Huntsman, played by Barret Blade reminds me of Dave Navarro, but brawnier and with a mock-British accent! Also, some gore makes an appearance when the queen whips out a bloody beating heart and proceeds to take a bite. Kudos to Braun for adding a little horror to heighten the sex appeal of the film. There really is a little something for everyone in Snow White. “The first entry in the newly formed Wicked Fairy Tales imprint, Snow White XXX: An Axel Braun Parody, was released on DVD only last Wednesday (April 23, 2014), and it sold out its first replication run within 24 hours” (Wicked Pictures press release)

When Prince Charming makes his entrance, we actually get a real handsome prince! Played by Ryan Driller, he gives the kiss that awakens Snow White from her magically induced slumber. It’s love at first sight, and romantic and sexy lovemaking ensues. The prince seems to have excellent lungs and can deep sea dive like a Navy Seal. A-plus to deep-sea diving handsome princes!

Make it a sexy date night with your honey and check out this hot and fun fairy tale parody today. Stay tuned for more fun fairy tales like this from Wicked Pictures. Purchase the streaming download or DVD at wickedpictures.com.