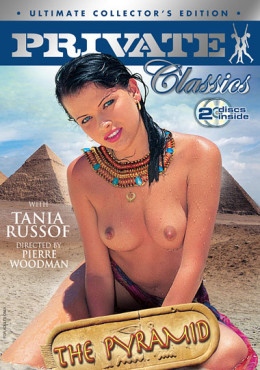 The European star, wearing a yellow top and tight denim shorts, is seen to flash her breasts several times while on a coach trip to the destination which attracts millions of tourists each year.

Facing the camera, the woman called Aurita complains about the views and having to pay $3 for an ornamental cat.

During the footage, the actress is seen to complain several times about how ‘unfinished’ the pyramids look and that she does not want to return to the Sphynx for more filming.

Even with tourists in the background, the actress continues to bare in the film that culminates with a graphic shoot.

Egyptian authorities have been angered by the film, which features several iconic locations around Giza and Cairo, according to a report on Newstime Africa.

“A set of sexually explicit scenes was illegally filmed inside the Giza Necropolis by a foreign tourist while visiting the site,”Antiquities Minister Mamdouh al-Damati said in a statement.

Al-Damati said the incident had since been referred to prosecutors for investigation.

When the footage came to light the authorities said it was fake and the scenes of Egypt had been edited in.

However, they have now backtracked coming in for criticism for failing to prevent the “scandalous” film.

Egyptologist Bassam al-Shamaa said that entry into the area in which the tourist appears is prohibited.

“A full security cordon must be installed to prevent such incidents – which demean Egyptian civilisation – from reoccurring,”

“If camera records confirm the filming of this video, the antiquities minister and the relevant security personnel should resign.”

Ready, Set, it's time to Record!

Use this recorder to record, download, and email your audio sample.

Click "Allow" in the permission dialog. It usually appears under the address bar in the upper left side of the window. We respect your privacy.

Are you sure you want to start a new recording? Your current recording will be deleted.