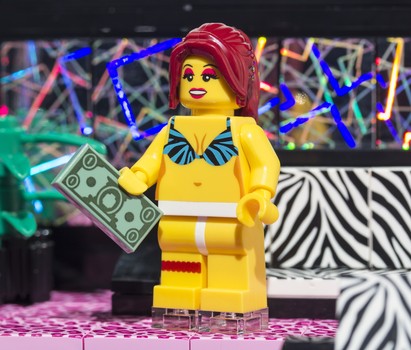 Citizen Brick, a web-based entrepreneur based on offering custom Lego sets for customers, has released a strip club set. The set, entitled with the tongue-in-cheek “The Citizen Brick Center For the Performing Arts,” is selling for $275. It is not officially endorsed by Lego, but it is selling like hotcakes.

Lego does not endorse these types of sets as they try to focus on making sets for a younger demographic. This is the company that rejected a fan push for a Firefly set because of the show’s darker content, after all. That’s where custom set builders like Citizen Brick come in, however. They operate in a gray area that, while not officially approved by Lego, they can still operate mostly unbothered so long as they don’t go too far.

Site owner Joe Trupia told the Huffington Post that he’s already sold a couple hundred of the set. His site has also created such adult-themed sets as Breaking Bad, though it isn’t referred to directly as such. Other sites have followed through on similar projects, including the aforementioned Firefly set, because there is still a demand for these sorts of sets, official or not..

Lego has been under fire recently for their lackluster attempts at courting the female demographic recently, so it makes sense to avoid being seen as officially endorsing a set based around strippers. So while it seems unlikely that Emmett will be frequenting the establishment himself, You can still set it up and have your own minifigs go in and enjoy themselves.